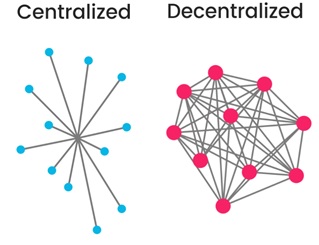 Is blockchain relevant to regional and community financial institutions?

Bitcoin. Decentralization. Cryptocurrency. Digital Data. All these buzzwords surround one new technology: Blockchain. For all the hype this technology has received in the media, the effects on regional and community institutions is still unclear and minimal.

In the most basic simplification, blockchain is a new way to connect individual devices to store data and authenticate actions, in a smarter and decentralized way. As shown in the figure below, in traditional centralized systems, a central server is used to access data. In a decentralized blockchain system, multiple devices store information and are interconnected. Storing data in this way provides tremendous cybersecurity benefits, since a single access point to the system does not exist.

Currently, the most common use case of blockchain is for cryptocurrency or online currency, such as Bitcoin. Using blockchain technology, bitcoin is able to process transactions, exchange money from person to person, and essentially be used as an actual currency to buy and sell goods. This purely digital currency now trades at a value of about $2800 per bitcoin (1). Interestingly, the currency only has value because consumers have given it value. In other words, bitcoin is not backed by any standard and there is no central entity insuring the currency.

Currently, blockchain is often associated with finance and banking since its first major use case is cryptocurrency and bitcoin. This is mainly due to the lack of infrastructure development in the industry over the past 20 years – blockchain developers see financial services as ripe for disruption.

Many financial products, such as payment systems, checking accounts and loans, could potentially be converted onto a blockchain system. For payment systems, any currency, stock, or title could be transferred effortlessly without the hassle of worrying about the type of product or its size. For loans, the system could check a person’s credit, allowing peer to peer lending without a central entity needing to authorize the transaction (2).

A large benefit of blockchain is the increase of transparency, especially with financial transactions. Bitcoin was initially created after the 2008 financial crisis, in an attempt to create a decentralized system, that would not depend on big banks (3). For these reasons, 15% of banks will use blockchain technology in some shape or form by the end of 2017 (4). However, most of this technology is still in infant stages, and needs significant development.

One of the largest struggles, and possibly an unsurmountable issue, is data storage. For example, if a financial institution has 500 gigabytes of data storage requirements, traditionally, one server would handle all 500 gigabytes. With blockchain, thousands of people, computers, or devices would store that same 500 gigabytes of data on their devices, which could be inefficient and often infeasible. For example, bitcoin currently requires over 100 GB, meaning for someone to process transactions, it would require them to access 100 GB on their computer (5), which is no easy task.

Another large potential problem is processing time to perform transactions or access data. In a traditional centralized system, it is very simple to access data; a user simply has to access one server and download the information. On the other hand, in a decentralized blockchain system, a request to access the data has to be processed by thousands of devices. This could possibly take ten minutes or even multiple hours. For example, if a customer of a financial institution wants to look at their monthly statements, it would be a big inconvenience if they had to wait for a long period of time.

A simple solution to these problems might be to create a blockchain with a small number of users, so data never has to be processed and stored by thousands of computers. However, blockchain is based on a decentralized system; the larger number of users, the more decentralized the network becomes. A blockchain with only five users, would not be safe or secure, since those five users could theoretically collude and control the system. They could accept or deny any transaction for any reason they see fit. With a large network there is a proper system of checks and balances to stop those who have malicious intentions.

What does it all mean for community financial institutions?

Fintech startups, venture capital and mega-banks will continue to show interest in blockchain, but the technology is still in the infant stages. While the impact on regional and community financial institutions is currently small, blockchain is definitely a technology to remain informed about, due to the tremendous potential to change how banking is brokered – some even think it has as much potential to change the financial industry as the internet did to media (6). For now, financial institutions should focus on updating their current technology, so if there are major breakthroughs in blockchain, their systems would be able to adapt and handle the change.

Is blockchain relevant to regional and community financial institutions?